IT'S LOUD. IT'S PACKED. IT'S INTIMIDATING. WELCOME 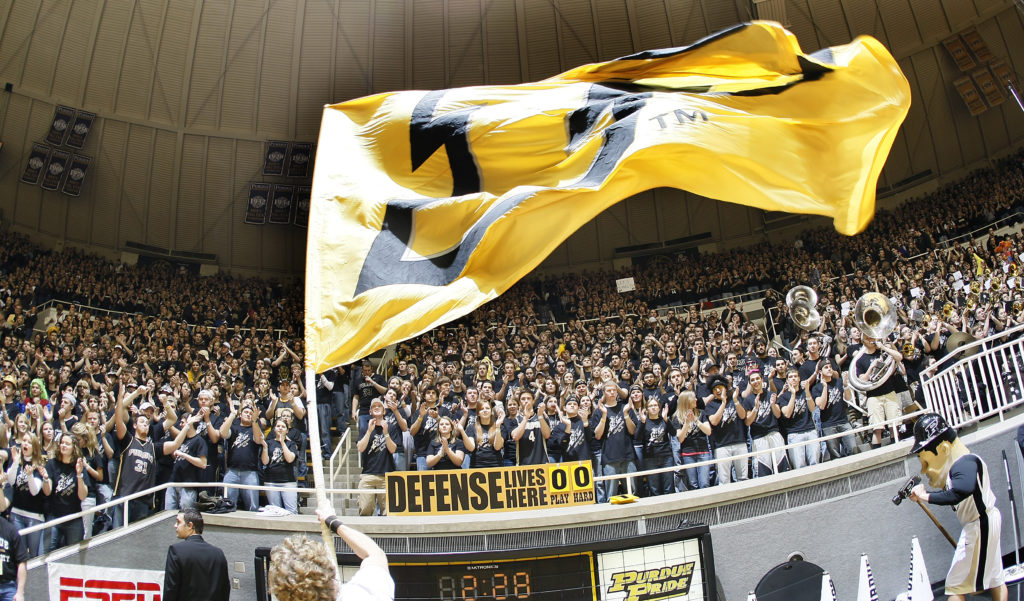 Legendary college basketball coach John Wooden and his defending national champion UCLA team were the first to find out that Mackey Arena is a difficult place to play for Purdue basketball opponents.

A team featuring Lew Alcindor (aka Kareem Abdul-Jabbar) came within a last-second shot of being the Boilermakers’ first upset victim when Mackey Arena opened on Dec. 2, 1967. More than 14,400 also witnessed Rick Mount’s debut in a Purdue uniform. The Indiana Mr. Basketball from Lebanon nearly shot the Boilermakers to victory with a game-high 28 points in a 73-71 loss.

Since then, Purdue has won more than 650 men’s basketball games, been home to the Big Ten Conference’s only women’s basketball national championship team and set a record attendance mark (10,645) for an NCAA women’s volleyball match.

Purdue men’s basketball, which achieved the No. 1 ranking in The Associated Press poll in December, expects to fill Mackey Arena’s more than 14,000 seats for every game in the 2021-22 season.

“Without question it gives us an advantage,” says Matt Painter, in his 17th season as Purdue’s head coach and a four-year letterman under his predecessor, Gene Keady, from 1989-93.

“The noise, the way it bounces off the ceiling, I think that’s a bit of a difference in how loud it gets. I used to always walk into the locker room after we win close games and say I don’t know if we would have won that game anywhere else in the country besides Mackey Arena. There’s no question the fans get us six to 10 points with the atmosphere here.”

The loudest Mackey Arena crowd was registered at 122.3 decibels during a 2017 victory against Indiana. That decibel level has been compared to sitting in the front row at a rock concert or the sound of a thunderclap overhead.

The noise quickly gets the attention of visitors and fans watching the games on TV.

“There is a possibility that Mackey Arena at Purdue is the loudest venue in college hoops. It kinda hurts to work here actually,” says ESPN’s Dave Flemming.

Mackey Arena was hailed as “the first of its kind among collegiate sports facilities” when groundbreaking for the circular concrete and steel structure with a domed roof took place on July 20, 1965. 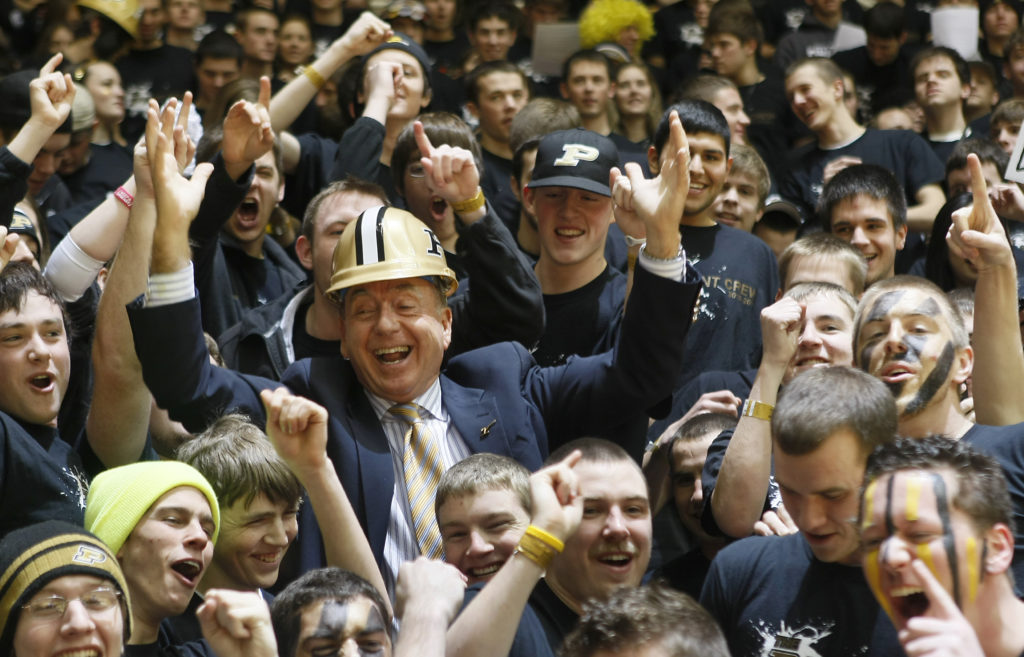 For more than 50 years, Purdue has gotten its money’s worth from the $6 million investment that replaced the old arena inside Lambert Fieldhouse next door.

Originally named Purdue Arena, it gained its current name in March 1972 when the facility was named in honor of long-time athletic director Guy “Red” Mackey, who had died the year before.

On Dec. 12, 1997, the floor of Mackey Arena was declared “Keady Court” in honor of Gene Keady, the winningest coach in Boilermaker basketball history.

If possible, Mackey Arena became a louder place to watch and play a basketball game when an organized student section was added in the early 2000s. Originally called “The Gene Pool” to salute Keady, the organized body was renamed “The Paint Crew” when Painter replaced Keady in 2005.

“From the opening tip to the final buzzer, every single fan in Mackey is into the game,” Randolph says. “Mackey is such a tough place because of how engaged and passionate the fan base is every day and especially every game. Every game is insanely loud and it does not matter who they are playing against.” 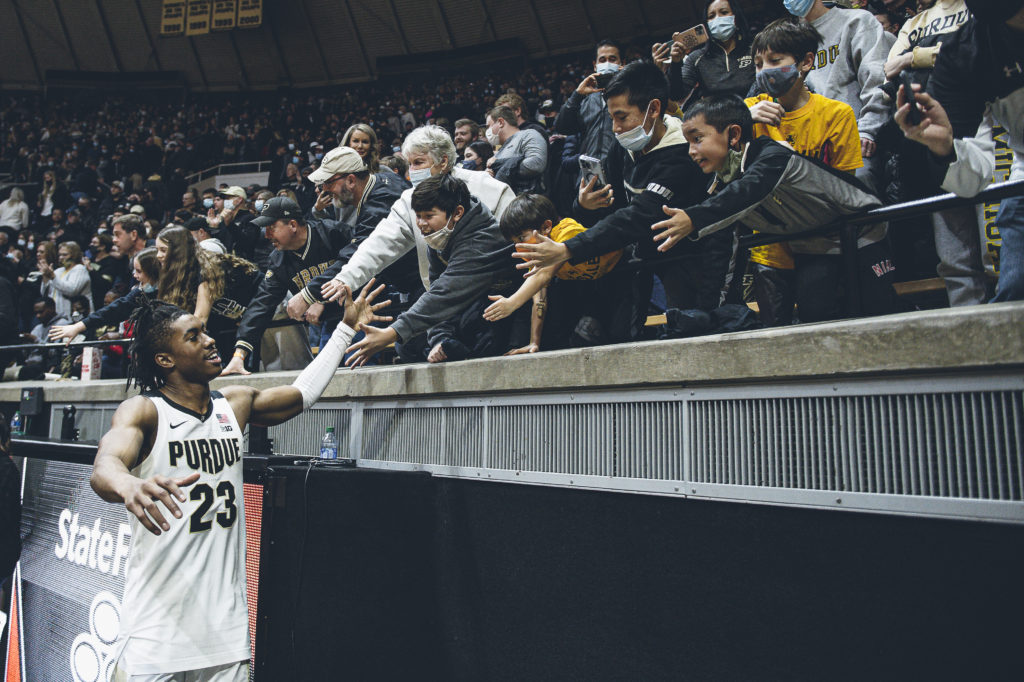 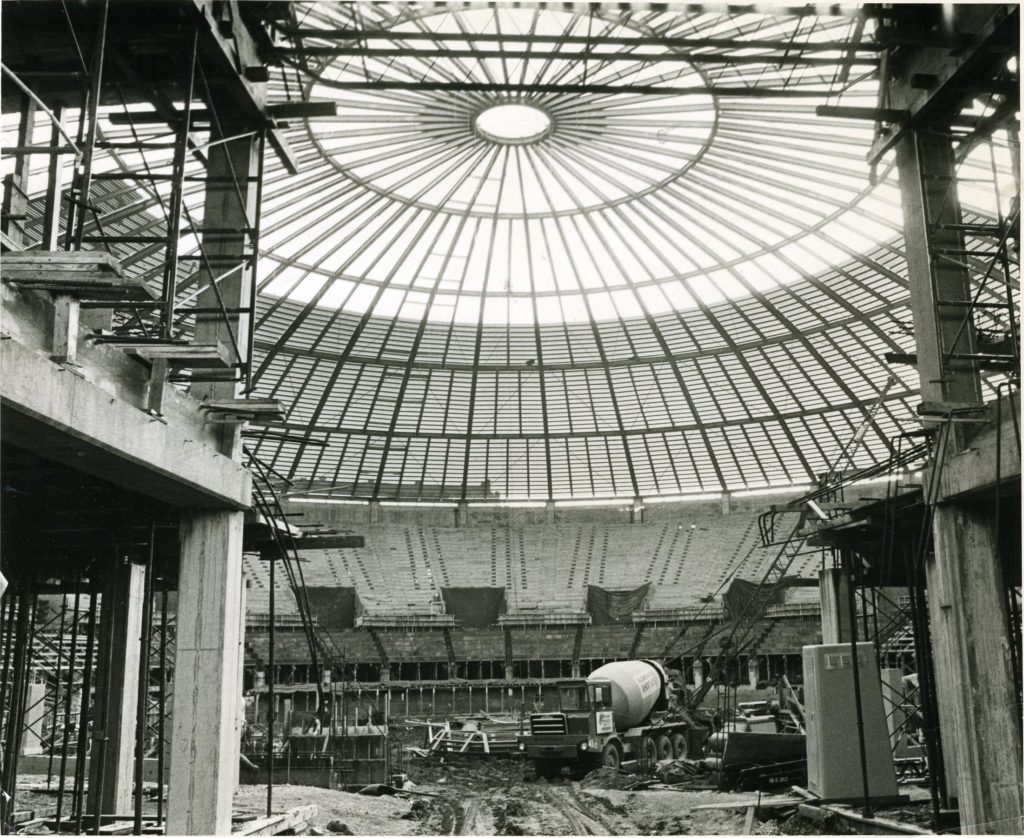 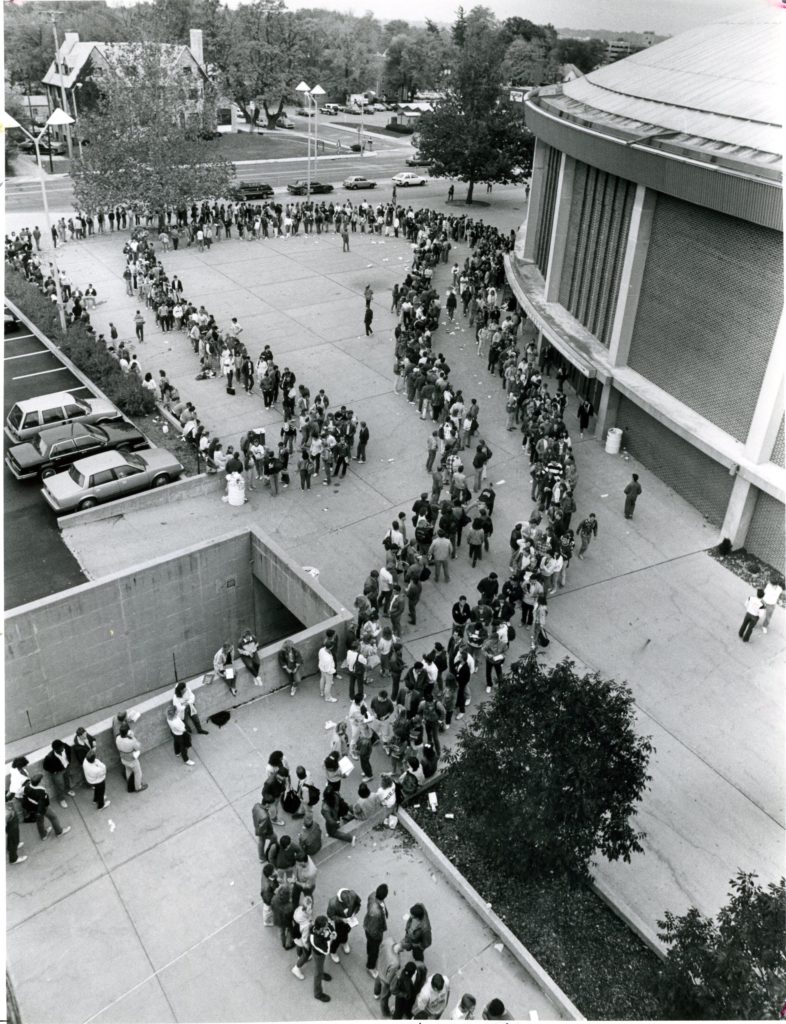 “Purdue was up 30 points in the first half and the crowd would go crazy for every dunk or big 3-pointer the team had,” he says.

The Paint Crew’s support hasn’t gone unnoticed by the players. Senior guard Sasha Stefanovic notices during pre-game warmups that the Paint Crew is usually full an hour to 90 minutes before tipoff.

“You feel our students right on top of you, always yelling,” Stefanovic says. “It feels very intimate at the same time. The intimate feel is something you notice right away.”

The deafening roar of Mackey Arena sometimes has its drawbacks. At Mackey’s loudest moments, Painter can’t call plays for his team and his players can’t hear what he’s saying.

“More or less, you can’t hear yourself think when it gets that loud,” Painter says. “You will have a moment or two every now and then where you are like, ‘This is unbelieveable.’ You become a spectator at times because (the players) can’t hear you. It is a pretty cool setup when it gets that loud. Even though it might be a little harder for us, it’s definitely harder for your opponent.”

Adds Stefanovic: “I’m telling you there are tons of times we don’t understand (Painter), can’t hear. Ball screen assignments, plays. Sometimes you practice with crowd noise when it’s going to be a big game. It’s a good problem to have.”

Mackey Arena was a quiet place to play during the 2020-21 season, when only family was allowed to attend games due to the COVID-19 restrictions. Painter wondered how his players would react to playing before crowds this season. Only junior guard Isaiah Thompson and Painter’s three scholarship seniors (Eric Hunter Jr., Stefanovic, Trevion Williams) had experienced Mackey Arena at its most boisterous.

“Our freshmen and sophomores had never played in a sold-out Mackey until this year,” Painter says. “Those guys walking into their first game and having a sellout in an exhibition, they think that’s the way it is. It’s not normally the way it is.

“Your exhibitions, they might call them a sellout but you don’t see 14,000 people there like this year. I think it was something pretty cool for all of us, to be out for a year and then be able to see a sellout every single game.”

It’s been more than 30 years since Painter played his first game as a Boilermaker in Mackey Arena. While he doesn’t remember many details, one memory stands out.

“I remember how much Coach Keady was fired up at the time,” Painter says. “I’m thinking, ‘Man, is he like this all the time?’ He was really amped up because the season before they hadn’t played as well. I was fired up watching him.

“He would try to get the crowd even more amped up than they already were. I’m a little different how I’m wired. I’m constantly trying to keep my poise and think about the next thing coming up.”

Stefanovic was 11 years old when he experienced Mackey Arena for the first time. Thanks to his brother, a Purdue student, Stefanovic found a seat among The Paint Crew when Robbie Hummel, JaJuan Johnson and E’Twaun Moore led fourth-ranked Purdue past sixth-ranked West Virginia on New Year’s Day 2010.

“It was a crazy, crazy environment,” Stefanovic recalls. “Those are definitely vivid memories.”

Randolph grew up imagining himself wearing a Purdue uniform in Mackey Arena. The next best thing was becoming a part of The Paint Crew when he enrolled at Purdue.

“After getting in, I fell in love with going to the games with all my friends,” Randolph says. “I really feel like we have a huge impact on the games. The loudest I have heard it was against IU during the (2019)-20 season. Eric Hunter had a breakaway dunk to end the half and Mackey exploded.

“I have never been to another college arena so I cannot compare them to Mackey. But I have a hard time believing them being anything close to Mackey in terms of fan engagement and level of intimidation for opposing teams.”  ★

WHAT THE FANS SAY

“Few things feel as helpless as being on the visitor’s bench when Purdue gets rolling at Mackey Arena.” – Mark Titus, former Ohio State player

“Look up intimidation in the dictionary and you’ll find a picture of Mackey Arena.”

“There are some environments that can’t be replicated and Mackey Arena is one of them.”

“Mackey Arena is one of the underrated, great environments in basketball. Does not get the attention it deserves for a place that absolutely rocks.”

“I feel like I say this every time Purdue plays a big home game,  but Mackey is a legitimately terrifying place.” – Eamonn Brennan, The Athletic