One house at a time

If you’ve spent any time lately in the Wallace Triangle neighborhood of Lafayette, you’ve seen a number of formerly dilapidated houses rising from the ashes, with rebuilt porches, upgraded landscaping, fresh coats of paint and reglazed or replaced windows.

While it is true that several developers and homeowners have been renovating homes in the area, a significant amount of the work can be attributed to a single couple: Alec and Kenna Williams.

Owners of The Heartland Concept, a realty, renovation and rental firm, the Williamses have tackled over 20 homes in the neighborhood around their own house, an American Foursquare on Elliott Street. Like the mother-daughter duo Karen Laine and Mina Starsiak Hawk, whose adventures in fixing up their own Fountain Square neighborhood in Indianapolis are chronicled on the HGTV show “Good Bones,” Alec and Kenna Williams are setting out to revitalize their own city block, one property at a time.

The best neighborhood it can be

It all started in 2014 when the couple purchased their first home, a green duplex in the Wallace Triangle, a wedge-shaped neighborhood bordered by South Ninth, Kossuth and State streets on the southern edge of Lafayette’s Old City.

ments, before taking a job in finance at Purdue.

Alec was working in business development for a Midwest healthcare company, but he was looking for something different. An old-house aficionado, he had grown up in a Foursquare home that his dad had painstakingly rehabbed.

From nearly the first moment they had met, the couple had dreamed of building their own company. As they first tackled the one-bedroom side of their home, then the two-bedroom side, they discussed whether they could turn their avocation into a vocation. Walking their dog around the block each day, the couple noticed a lot of homes that needed some love.

“We’re very invested in this area, we love it,” Kenna says. “Alec says it best. If this is where we’re going to raise our family and have our children going up and down the street, we want this neighborhood to be the best it can be.”

Diy-ing as a money-saver

The Williamses soon got the chance to test their professional rehabbing chops when an 1868 home on 10th Street came up for sale. With a bay window, a window seat, wide painted woodwork and built-ins, the home was oozing with cottage charm. But other old-house details had become obscured under less-than-faithful remodeling efforts, like a teal garden tub with a matching toilet.

After hiring subcontractors for some of the work, the couple tackled as much as they could themselves. “Our belief was, if we’re going to make a business out of this, provide for our family, DIY-ing… that’s where you save money,” Alec says. Working late nights, early mornings 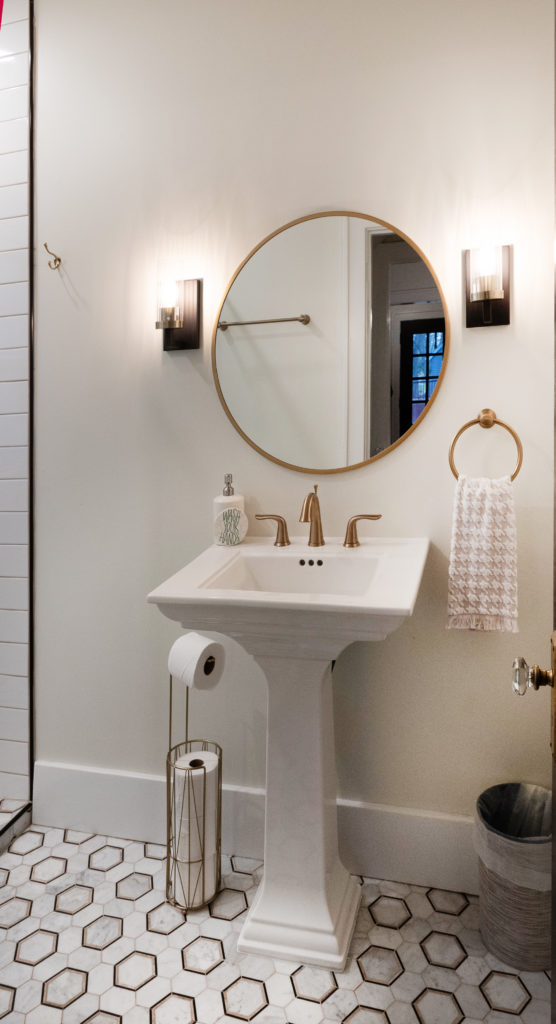 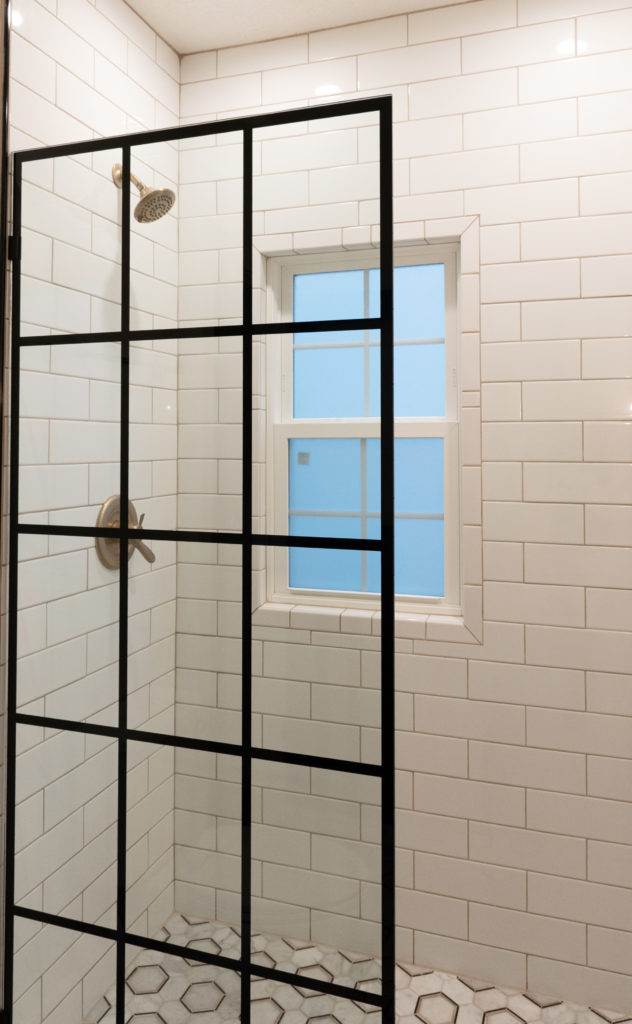 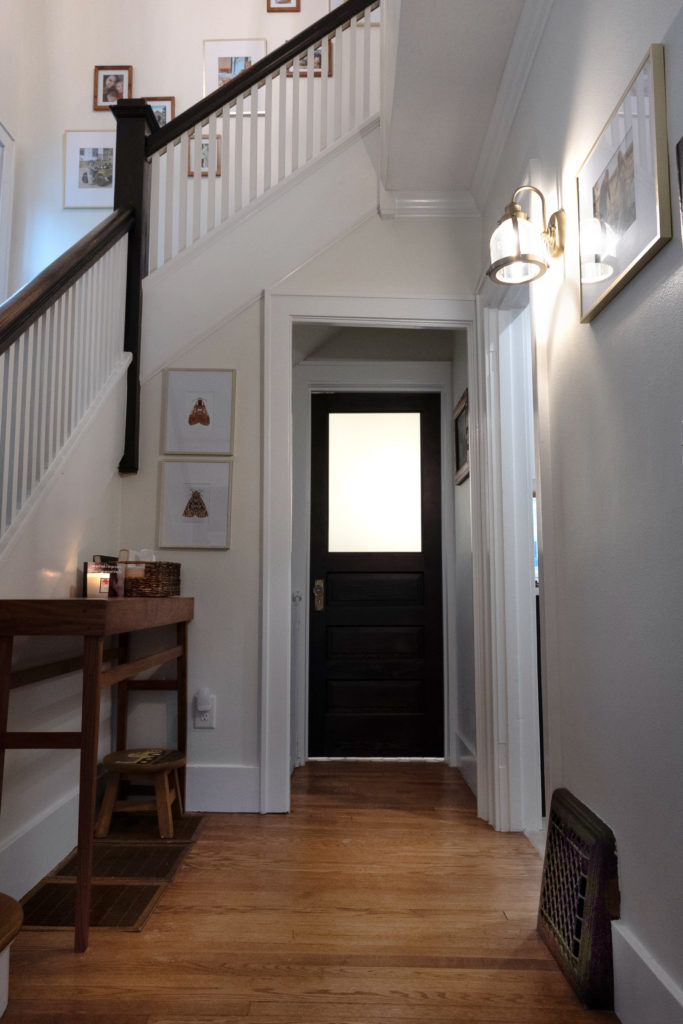 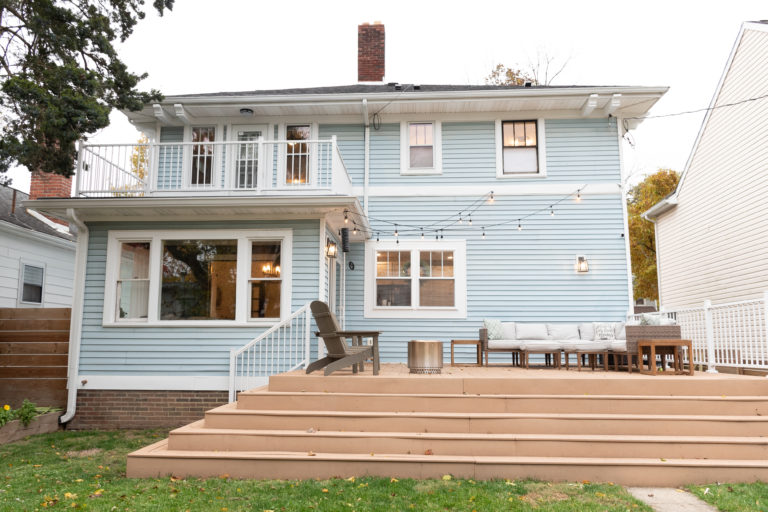 and weekends, the couple slowly turned the house back into a cozy cottage. A claustrophobic screened-in porch was torn out and rebuilt, minus the screening. Faulty wiring was replaced, and new shingles went on the roof. Layers of paint were scraped and recovered in a light yellow with white trim.

Inside, the 1980s bathroom gave way to a stand-up shower featuring subway tile, accented with a greenish arabesque. Board and batten replaced the dining room’s lower stamped plaster walls. Floors throughout were sanded, stained and top-coated, and the fireplace was painted and accented with crisp white shiplap. Inside and out, not-so-charming light fixtures were replaced with breezy ceiling fans and farmhouse lights.

Two days after the couple wrapped on the rehab, in May 2017, they accepted an offer.

Fast forward to 2022 and The Heartland Concept is now Alec’s full-time job. Kenna has cut her hours as a senior financial analyst at Purdue, and since the COVID-19 pandemic, she has worked from home at a small desk on their second-floor landing. As they continue work on their family home – current projects include renovating the basement and reglazing the original five-over-one windows – they continue to rehab homes and commercial properties in their little slice of Lafayette.

Their business model is simple: For each house that they renovate and sell, they buy another rental in their neighborhood, then fix up that one, and then rent or sell. Over the last few years, they’ve sustained an income with the rentals, which has allowed them to take their time with each house renovation — un-

like many developers, who have an imperative to renovate as quickly as possible in order to turn a profit.

“I really hate calling any of our houses a flip,” says Kenna. “We really renovate, we take it down to the studs when necessary. I try to incorporate with the finished design, the old features. That’s renovation to me.”

When floors can’t be refinished, the couple tries wherever possible to use engineered hardwoods for a vintage look. In bathrooms, many of which are much smaller than in newer homes, the couple can afford to use high-end finishes like penny tile floors and solid surface countertops. New light fixtures often evoke a vintage feel, like the wall sconces the couple incorporated into their own Elliott Street home. 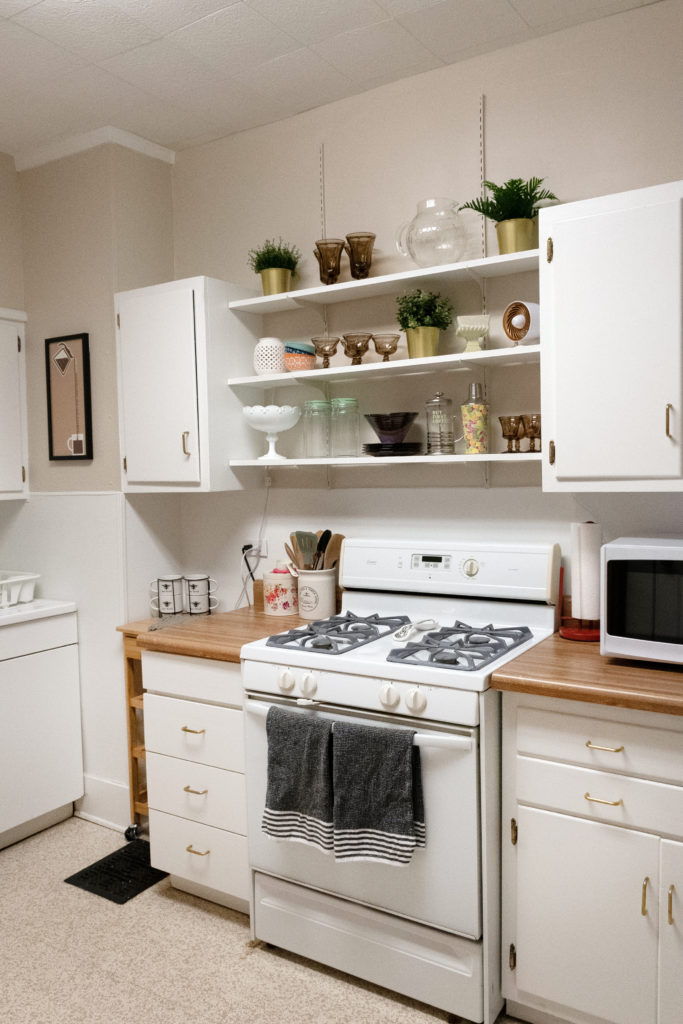 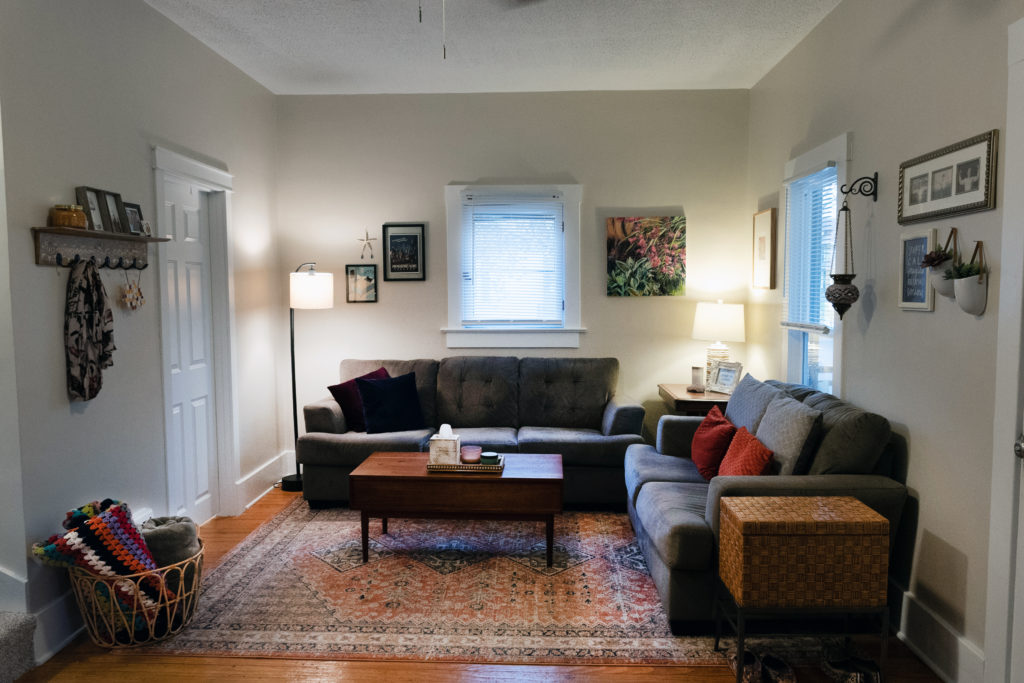 One lesson they’ve learned: while aesthetics boost a home’s appeal, they are not all practical for long-term rentals. As a result, some of their newer rental renovations, like the tiny mint green bungalow they rehabbed, are outfitted with tub-shower surrounds that don’t need regrouting over time. Other finishes in the single bathroom, like the curved warehouse light and scalloped mirror, help maintain the vintage-modern balance.

With each renovation, whether for rental or resale, the Williamses aim to provide a level of workmanship they would expect in their own home. A case in point: the National Home the couple rehabbed outside their own neighborhood, near Columbian Park. Adding livable space in the basement was critical for resale value, and yet the basement leaked, which the couple attributed to water pooling outside the home because of a lack of gutters and downspouts.

Gutters installed, the couple went to work on the basement. Then winter came, with rains and melting snow, and the almost-renovated basement sprung leaks again.

After considering less costly and less permanent options for the exterior, the couple decided to start anew. “We both looked at it, and [said] if this is our house and our space, we don’t want an issue,” Alec says. “We tore out all the walls and electrical, having a full interior perimeter drain installed with a sump pump, guaranteed against everything, then rebuilt.” 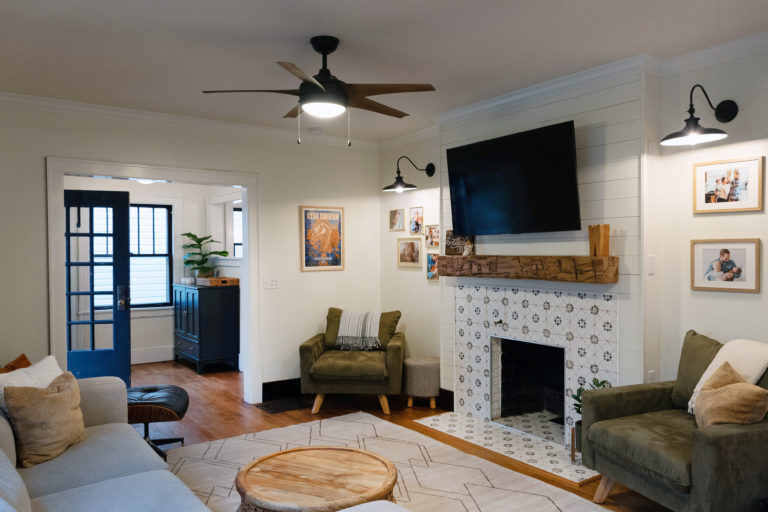 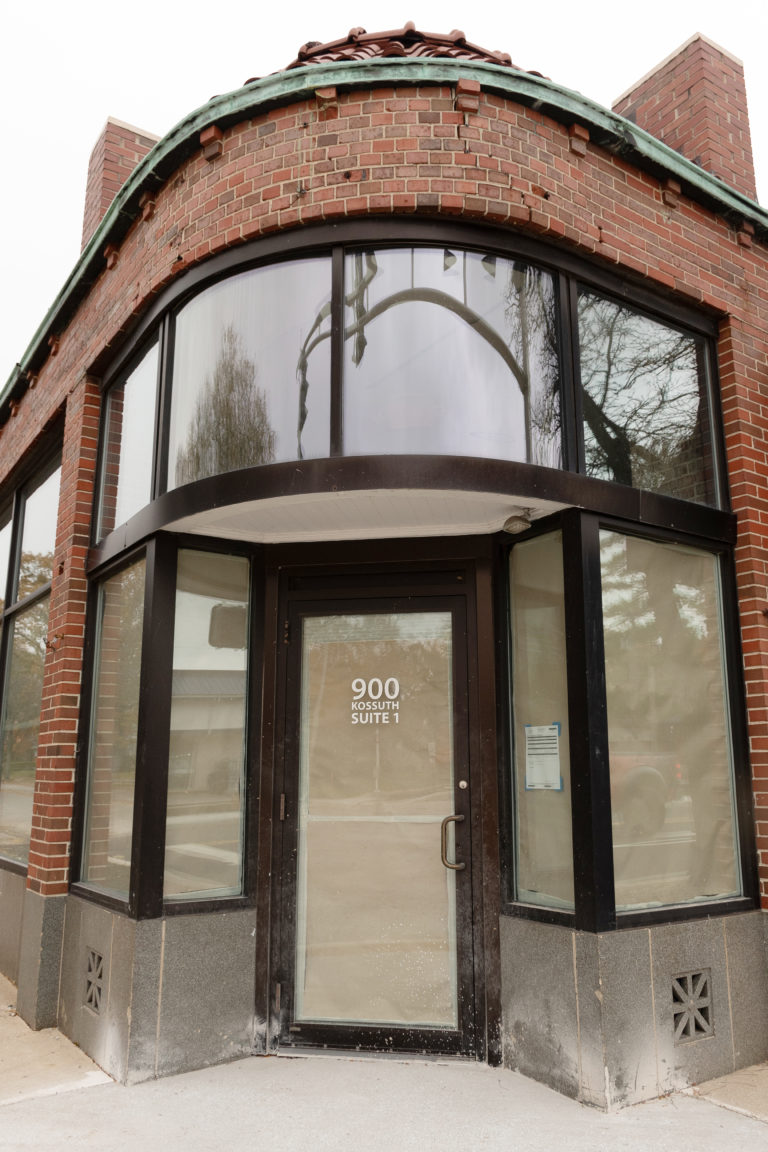 As the Williamses continue to buy, rehab and rent or sell historic homes, they also have expanded their focus to the commercial side of the neighborhood – namely, the corner where the Wallace Triangle meets Historic Ninth Street Hill and Highland Park.

Last fall, as the City of Lafayette regraded the street and added brick pavers to help alleviate runoff, the couple continued work on the L-shaped structure. More than 100 years old, the building boasts large windows and red clay roofing tiles. Soon, its anchor spot will be the location of People’s Brewing Company. The venue will serve German cuisine, specially brewed German beers, wine and cider.

Although the parking lot along Ninth Street is ample enough, Alec and Kenna anticipate that many of the brewery’s guests will come from foot traffic, like England’s public houses. “People’s Brewery should do extremely well by how many community members around here have shown support,” Alec says.

Since moving to the Wallace Triangle nearly eight years ago, about a dozen of the Williamses’ friends have moved there as well and begun working on their own homes – a testament to the couple’s success in their one-house-at-a-time revitalization mission. “We love what we do and it’s good to have an impact in the town we live in,” says Kenna.  ★