Mountain bikes in the Midwest

While there is nothing resembling a mountain in Tippecanoe County, there is a growing group of local mountain bike enthusiasts who are creating and maintaining trails and opportunities to participate in the sport they love.

The sport of riding bicycles off-road, on trails and rough terrain, has gained in popularity during the last 30 years and is something people of all ages can enjoy, says Jason Pruitt, president of the Tippecanoe Mountain Bike Association.

Pruitt has enjoyed biking for decades, starting out with road bikes and riding competitively in endurance races. But when he began mountain biking, things changed.
“Once I got out in the woods, I thought, ‘This is so much better, just being in the woods and in nature. I love riding with friends, but sometimes just riding alone in nature is great.’”
After he and a group of mountain biking enthusiasts found each other more than a decade ago, they began working together to help maintain the mixed-use trails they all used, and help educate people about protecting nature while enjoying the sport they love, he says.
Out of that effort, the TMBA was formed, and members have enjoyed biking and working together to create and maintain a robust series of area bike-accessible trails. There are now 26 miles of trails in Tippecanoe County that feature a variety of difficulty levels and are on public and private land accessible to the public.
The first bike trail the group focused on is at the Tippecanoe County Amphitheater. The trail system there was created for the Harrison High School cross-country team, but many other hikers and bikers have enjoyed those trails for years, says Tippecanoe County Parks Superintendent Randy Lower.
“At first we wanted the mountain bike trails to parallel the running trails and not connect, because we didn’t want collisions between bikers and runners,” Lower says. “But that hasn’t been a problem and the biking trails now utilize and crisscross the cross-country trails. We haven’t heard about much interaction between bikers, hikers and runners.” 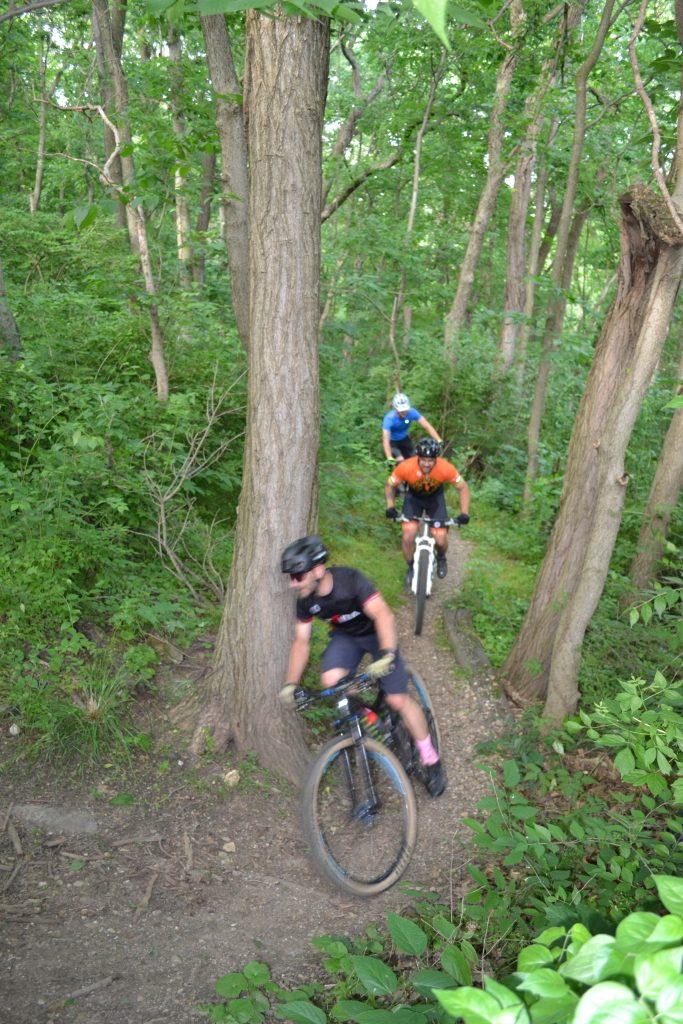 The Amphitheater trails are geared for novice riders, although some areas are a bit challenging, he says. There are two sections of trails and even a kid’s loop that is smoother and shorter so young riders can get a feel for the terrain.

There are many possible mountain bike features, but the basic requirement is a bike with a suspension system to soften the jolt of riding over roots and rocks, and a sturdy frame that can take the impact of rough terrain, says Garrett Wass, bike mechanic at Virtuous Cycles in downtown Lafayette.

Wider tires with heavy-duty tread take the bumps better than narrow road bike tires. Working with a professional to determine the best kind of suspension, tires and brakes for the terrain you want to traverse will make your rides more enjoyable, he says.

On a recent June evening, more than 20 TMBA members gathered at the Amphitheater for a weekly ride. The group meets each Wednesday during the warmer months at different trails to ride, practice needed skills and receive updates on upcoming work sessions that keep the area trails in good shape, says Pruitt.

The group was made up of bikers of all ages and experience levels, including Owen Broadstreet, a 14-year-old student from Delphi. His father introduced Owen to the sport when he was 10, and he rides regularly with TMBA.

“This group is really inclusive,” says Broadstreet. “You just show up and you’re in.”

Claire Stirm, who handles events and outreach for TMBA, has been riding for two years, after her husband introduced her to mountain biking. The couple rides together about three times a week, and she particularly enjoys the Wednesday TMBA rides and helping new or inexperienced riders feel comfortable.

The riders split up into groups that start down the trails at staggered times. The fastest, more experienced riders go first, but Stirm often rides with the last group, which is affectionately called the “party pace.” This group may stop to go over techniques needed for certain trail features, and members are happy to wait for slower riders so everyone feels included.

Seth Aichinger, who has been riding mountain bikes for more than 20 years, says being part of TMBA has been life changing. He calls the members “super supportive and friendly” and he appreciates the educational elements that are included on rides.

“There’s always room for improvement and the trails are always changing, so you have to pay attention,” he says. “It’s such an adrenaline rush and the Wednesday group rides are awesome.”

While the Amphitheater trails are a great place to learn the sport, more experienced riders are partial to the trails at Hoffman Nature Area. The six miles of trails in this heavily wooded area off old Indiana 25 west of Americus were cleared and specifically designed for mountain biking by TMBA members. The county parks department oversees the property. It’s a favorite spot for Wass, from the bike shop.

“Hoffman is the best,” Wass says. “It has more advanced features than some of the other trails and was built by mountain bikers, for mountain bikers.”

The Hoffman trail is a loop, and certain features are labeled so bikers can choose to go over the feature, such as a log or steep rock incline, or around it on a separate path, Wass says. In fact, labels have been added to several of the TMBA-maintained trails so bikers can make informed choices as they ride.

Parks Superintendent Lower concurs that the Hoffman trail is popular with more experienced riders, adding that the construction and maintenance of those trails, and others,  would not be possible without the work of the TMBA.

“They are always looking to expand and improve the trails,” he says of Pruitt and other members. “We wouldn’t be able to maintain all the trails because we just don’t have the manpower. And some of them run close to the river and creeks, which means the trails change because of erosion. (TMBA members) are out there rerouting them, improving and expanding them.”

When the group first formed, it focused on just keeping the existing trails clear of fallen branches and deadwood, says Pruitt.  Now the group meets many Saturdays to clear trails, cut back invasive species, pull weeds and break out new trails.

Another challenging area is the Haan Trail, located off State Street near downtown Lafayette behind the Haan Museum of Indiana Art. A separate, lower section is accessed from Valley Street. Bob and Ellie Haan owned the property and lived in the mansion on the grounds when they became interested in mountain biking after making a trip out west in 1998.

“We got interested in it on that trip and realized it was a skill sport, not an endurance sport,” says Bob Haan. “We came home and started building a trail behind the house so we could learn the skills needed for mountain biking.”

The Haans worked on the trails for about a decade, creating such features as benched areas, bridges, ramps and whoop-de-dos, along with 45-degree drops in the advanced sections. During that time, they made lots of friends in the mountain biking community and in 2011, opened the trails to the public. TMBA has since taken over maintenance of the trails that are connected through Valley Street. The Haans, both in their 70s, continue to enjoy mountain biking and the community that surrounds the sport.

The TMBA also maintains the Murdock Park Trail, owned by the city of Lafayette, and McCormick Woods Trails, just west of the Purdue campus in West Lafayette. Two years ago, the local group was the first state-wide to join the Hoosier Mountain Bike Association, which advocates for the creation of trails in Indiana and natural resource protection.

One of the goals of TMBA is to find ways to connect the different county trail systems so riders can easily get from one to another. The group also is working with such organizations as the Girl Scouts to teach mountain biking skills and safety, and recruit others to help with trail upkeep.  ★