A large number of Tippecanoe County residents cannot remember a time when Caterpillar Inc., wasn’t a major part of Lafayette’s east side landscape.

Caterpillar is celebrating its 40th anniversary in Lafayette, a partnership that Tippecanoe County commissioner Tom Murtaugh says is beneficial to both.

“Caterpillar has played an essential role in the growth of this community and the region,” Murtaugh says. “In addition to creating great employment opportunities for hundreds of families over the past few decades, Caterpillar has been a generous community partner and supporter of the United Way and countless other community initiatives.”

Caterpillar is stepping up its community involvement with a 40 Days of Giving program that launched in early August.

“This is a facility-wide initiative to engage our employees and give back to the communities that have supported us continually over the past four decades,” Markun says.

“Teams across engineering, supply chain, human resources and more are finding needs in our communities and providing their time and resources to address them. While we have much to celebrate internally with the 40-year milestone, none of this would be possible without our community partners.”

It was big news in 1977 when rumors began to circulate that Caterpillar was interested in building a plant in Lafayette.

Murtaugh’s family played an important role in the plant’s location. His was one of four families who sold a combined 425 acres to Caterpillar in 1977. The deal was so top secret that Murtaugh remembers “company X” buying his family’s farm.

Even after officially announcing the land purchase on Sept. 22, 1977, at the downtown branch of Lafayette National Bank, Caterpillar chairman William L. Naumann had little to say publicly about the decision to bring the manufacturing of its new Series 3500 diesel engines to Tippecanoe County.

Journal & Courier business writer Judy Horak reported that Naumann cited four factors that attracted Caterpillar to Lafayette. First was the site not only being large enough for a Caterpillar facility, but it also had excellent access to I-65, railroad transportation and good utility services.

“We find a strong spirit of community pride and cooperation here,” Naumann said of the second reason. He was just as succinct with the other two factors.

“The quality of local government and community services is excellent. Finally we are attracted by the quality and character of the Lafayette-West Lafayette-Tippecanoe County area.” 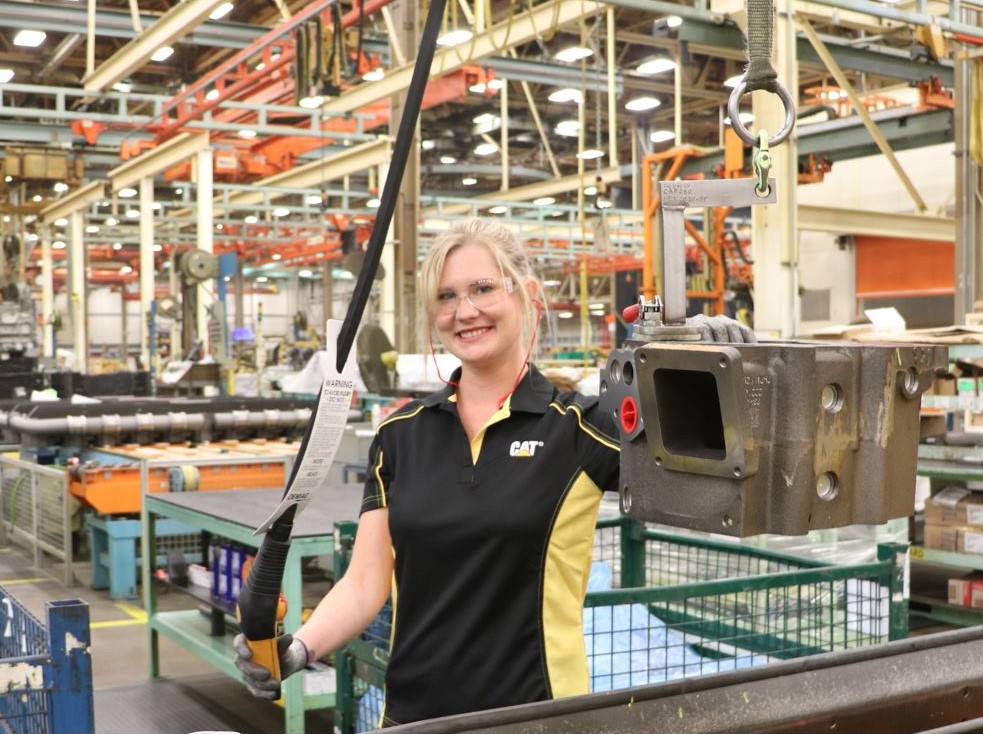 While the courtship was completed, it would be five years – November 1982 – before employees began pre-assembly work on parts for the Series 3500 high-powered diesel engine. The first Series 3500 engines were assembled in December 1982.

Tony Roswarski was on the verge of beginning a career in law enforcement 40 years ago. Today, he’s approaching 20 years as mayor of Lafayette.

“Caterpillar has been an important piece of our economic foundation for the past 40 years,” Roswarski says. “Its global presence helps put Lafayette on the worldwide economic map. Closer to home, it creates great paying jobs, pays taxes that help fund the police, fire and parks department along with great schools.

“Caterpillar helps families build their future and have a high quality of life. They have been a wonderful corporate citizen, giving back through the company and its employees. Thousands of people a year enjoy CAT Park, and more now will have the opportunity as the new all-inclusive sports field will be finished soon. Caterpillar truly has made a positive impact on Lafayette over the past 40 years.”

Look no further than these numbers to measure Caterpillar’s impact on Lafayette’s economy. When it announced in early January 1982 that it was taking applications for 40 maintenance positions, the company received approximately 600 resumes.

As more job openings were posted, Caterpillar’s local post office box overflowed with resumes. More than 3,400, in fact, by March. As Lafayette celebrated the new year 1983, approximately 300 management, salaried and production workers were in place.

Today, Markun says the Lafayette Engine Center machines and assembles diesel and natural gas engines that power the world – the 3500, the 3600 and the C175 engines.

“When our facility opened, we were developing and manufacturing 3500 engines,” he says. “Over the 40 years, this engine platform grew to be the industry standard for heavy-duty diesel and gas engines worldwide, and we introduced two more platforms – the 3600 and C175. These units are custom-built to ensure our customers get exactly what they need.

“The 3500 engine primarily helps support the electric power, oil and gas, rail and marine markets around the globe. The 3600 is a huge player in the oil and gas segment, and the C175 is largely utilized in mining and electric power applications.”

Caterpillar may be celebrating its 40th birthday locally but it also is looking ahead to the next decade. The Lafayette facility will play a key role in Caterpillar’s effort to “integrate sustainability” into its core business.

The company website boasts how Lafayette’s facility is meeting the goal of recycling power into the day-to-day operations.

“When a new engine or component is offered, it is important that we conduct many testing hours on each product to provide confidence to our customers that they are buying the highest quality engine available.

“The amount of energy created by the testing process is tremendous. Rather than waste it, the team explored various options to harness the energy. Understanding that endurance testing is a necessary and critical means to assure product quality, they looked for a way to use the electricity-generated power to support facility operations which would otherwise have been wasted.”

Caterpillar states that the electricity generated by the endurance test pad provides supplemental energy to power the Lafayette plant. With roughly 130,000 metric tons of CO2e emissions avoided over the last five years, Caterpillar has saved more than $11 million.

“Harnessing the power from their endurance testing is just one example of the Lafayette facility’s sustainability journey. Through their continuous improvement projects, the team has implemented several programs resulting in general reductions in greenhouse gases, water usage and waste.”  ★ 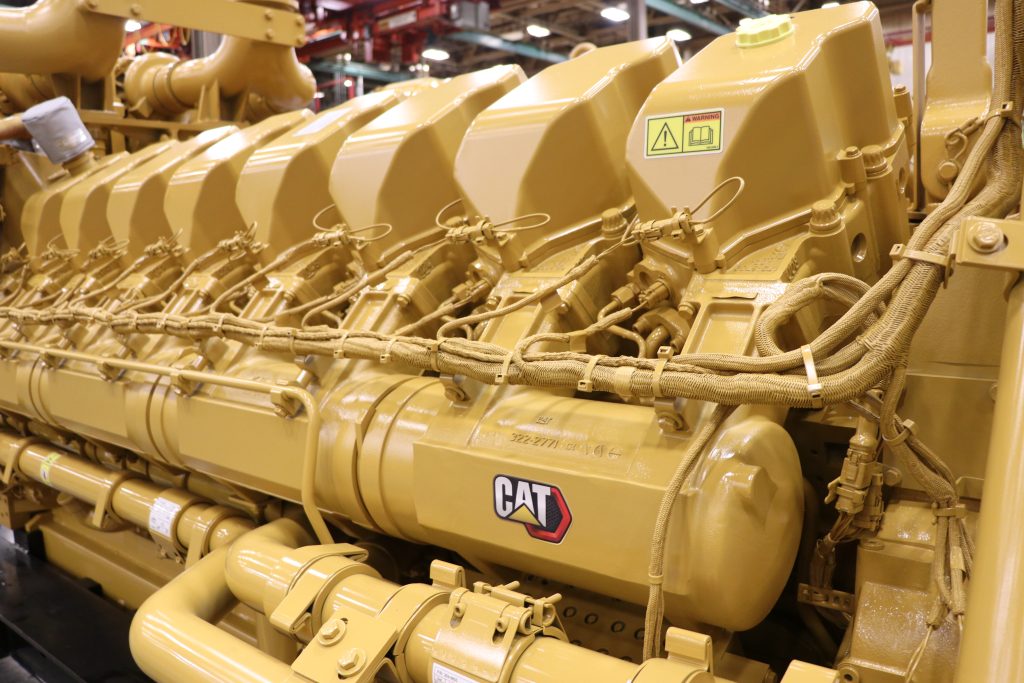 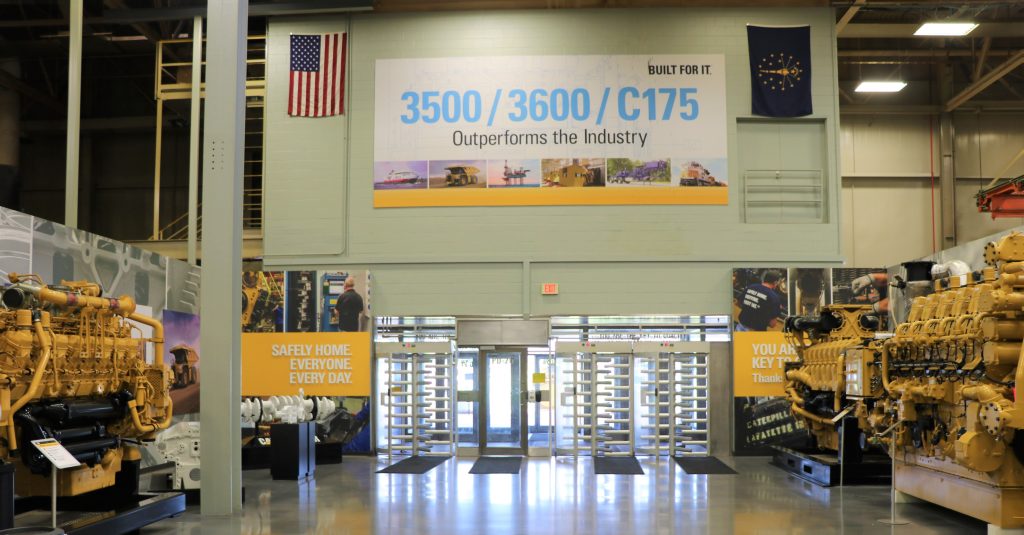