Dinner at The Farm

BY KAT BRAZ
PROFILE PHOTO BY CHRISTINE PETKOV, OTHERS PROVIDED 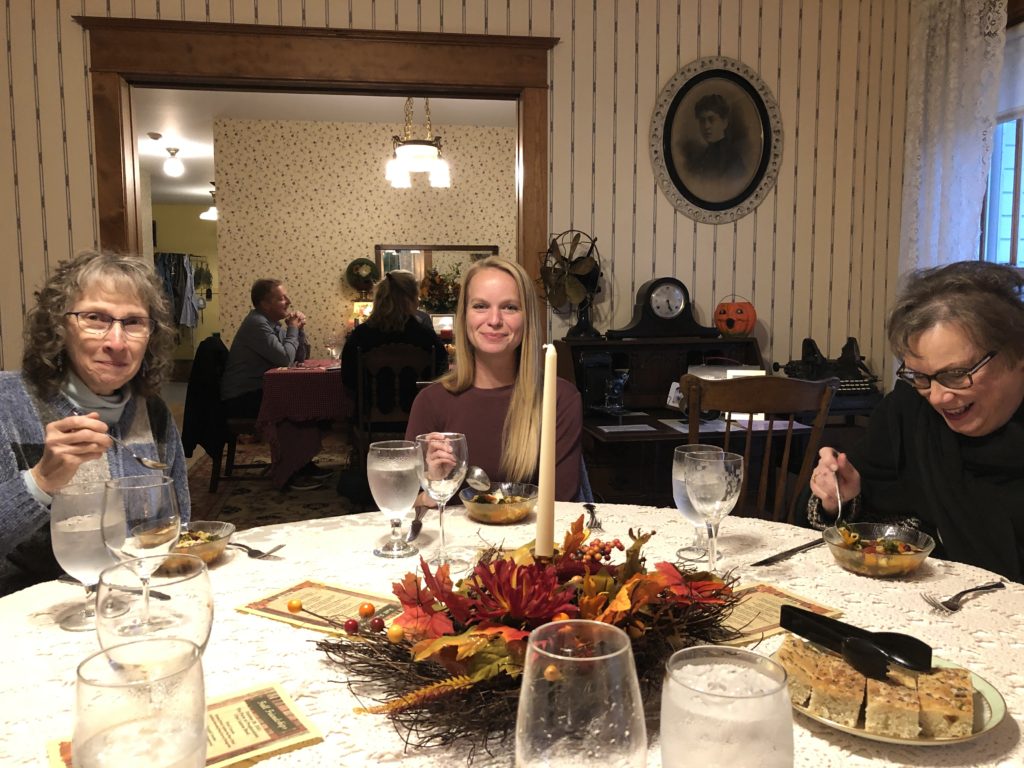 When Lauren Reed joined the staff at The Farm at Prophetstown six years ago as events and education coordinator, she had no idea her role would evolve into her dream job as an executive chef. At the time, the nonprofit Museums at Prophetstown was in the red, and Reed and then-director Leslie Conwell focused their energies on restoring livestock and crops to reinstate the working farm and attract more visitors.

“We needed to make money and I happened to have these skills as a chef, so I suggested we try holding farm-to-table dinners,” Reed says. “The first year, I did maybe five or six with 20 guests at each dinner. It took a couple of years but it’s really become a thing.”

Indeed it has. Chef Reed’s farm-to-table dinners, where diners feast on five courses while seated in various rooms of the Gibson farmhouse, are so popular that last season’s dates sold out within two days. A few dinners each year are reserved for members of the farm, and Reed also schedules private dinners for parties of 12 or more.

“To my knowledge, we’re the only organization offering farm-to-table dinners in a museum environment,” Reed says. “Serving on vintage china in a 1920s setting creates a special ambiance and memorable dining experience.”

Although the atmosphere reflects the ’20s — the farmhouse is a replica of a kit home sold via catalog by Sears, Roebuck & Co. outfitted with antique furnishings and decor — the menus decidedly do not. Reed describes the most notable dishes of the decade as “downright nasty” as they featured lots of mayonnaise, gelatinous concoctions and canned seafood. Instead, she draws inspiration from the seasonal ingredients — greens, starches and proteins — grown right there at Prophetstown or sourced from other local farms.

“I love using ingredients we produce here on the farm,” Reed says. “My focus is to use local ingredients as much as possible so it pigeonholes my menus in some ways. I don’t use pineapple, for example. I do bend the rules a bit; I’m not going to cook without lemon. But I don’t put a lot of extra stuff in the food because I don’t think you need to. 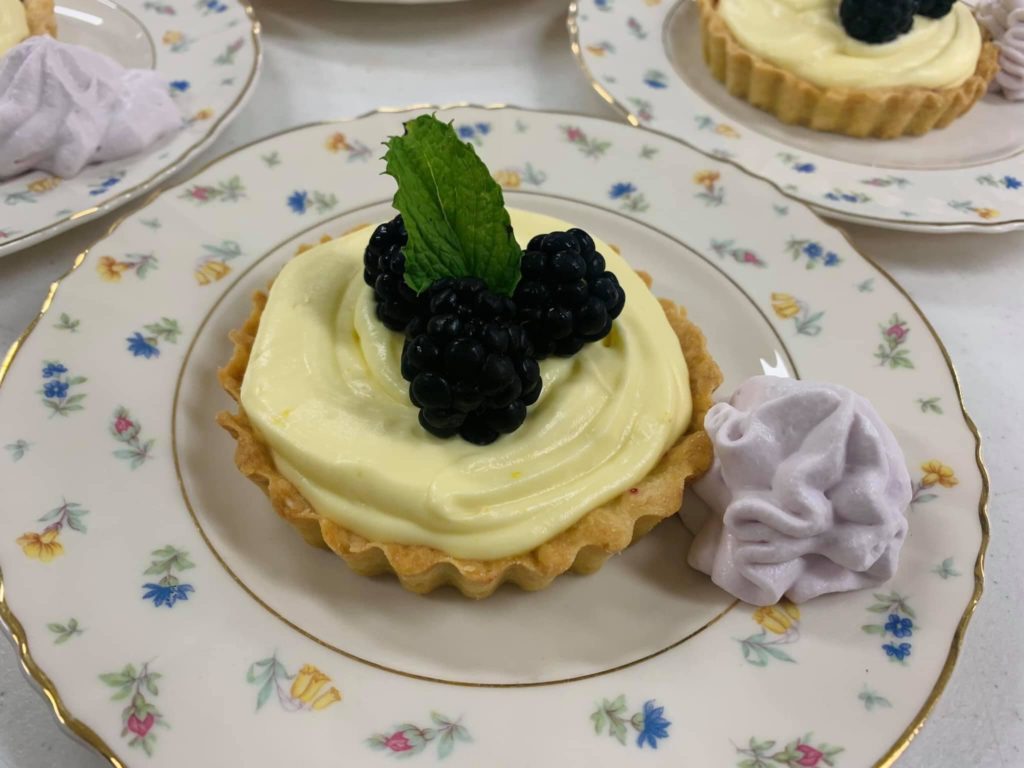 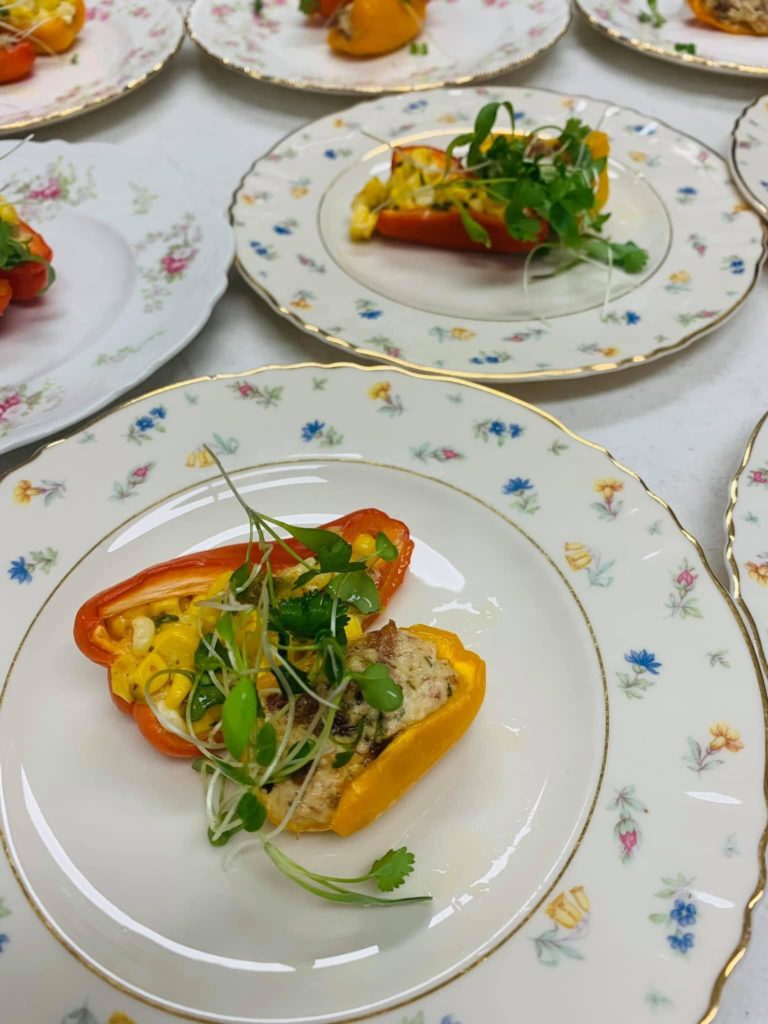 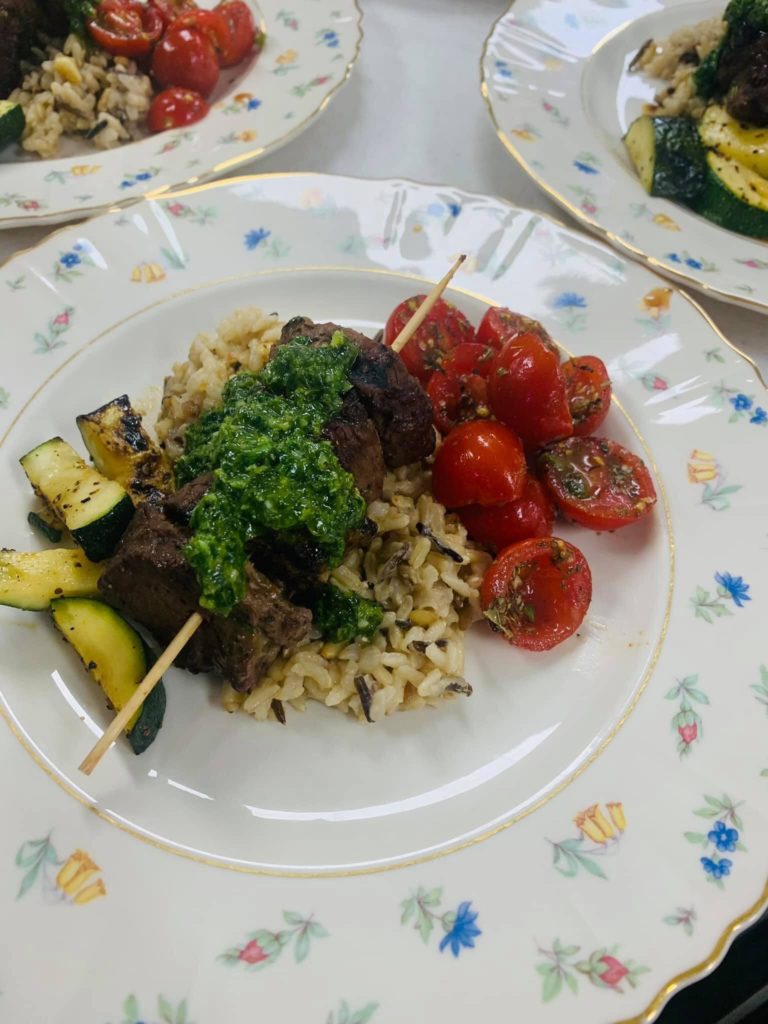 You don’t need 35 ingredients on a plate to make something taste good. When you use quality ingredients, the flavors will shine through.”

Reed’s passion for cooking became evident at an early age. Family lore holds that when her parents bathed her in the kitchen sink, she’d reach out one hand to the stand mixer on the counter and idly spin the mixing bowl. Growing up in Rossville as an only child, she remembers coming home from school and frying up batches of homemade onion rings at age 12. It was no surprise that her very first job was working in the kitchen at the Milner nursing home in Rossville.

“I’ve always loved food and I’ve always loved cooking,” Reed says. “But I didn’t think I would become a chef. I went to school to study food nutrition and journalism. I wanted to write about food. But I never stopped cooking.”

Reed earned her bachelor’s degree from Indiana State, cooking at commercial restaurants throughout her collegiate years. When an upscale wine bar opened in Terre Haute, she contacted the executive chef who agreed to give her a two-week trial in the kitchen. It was a trial by fire.

“It was me and a bunch of older guys; I was the baby,” Reed says. “I was the only woman. I had to climb my way up and I did. I ended up taking the grill job from the guy who was on the grill and he never spoke English to me again. He hated me after that because he had to wash dishes.”

Though her skills were undeniable, she still faced sexism in the kitchens where she worked in the form of lewd comments, unwanted touching and targeted harassment. At one point, she worked as the head grill cook at a busy steakhouse, grilling upwards of 50 steaks at a time to temperature. She’d be in the walk-in cooler unwrapping steaks and coworkers would turn the lights off on her. Once, the general manager cornered her in the dish room and a bunch of guys laughed as she was sprayed down with the dish hose. She had to finish the final five hours of her shift in sopping wet jeans.

“It’s very hard to be a woman in a kitchen, especially a male-dominated kitchen, which many of them are,” Reed says. “It takes a strong personality. You have to hold your own. 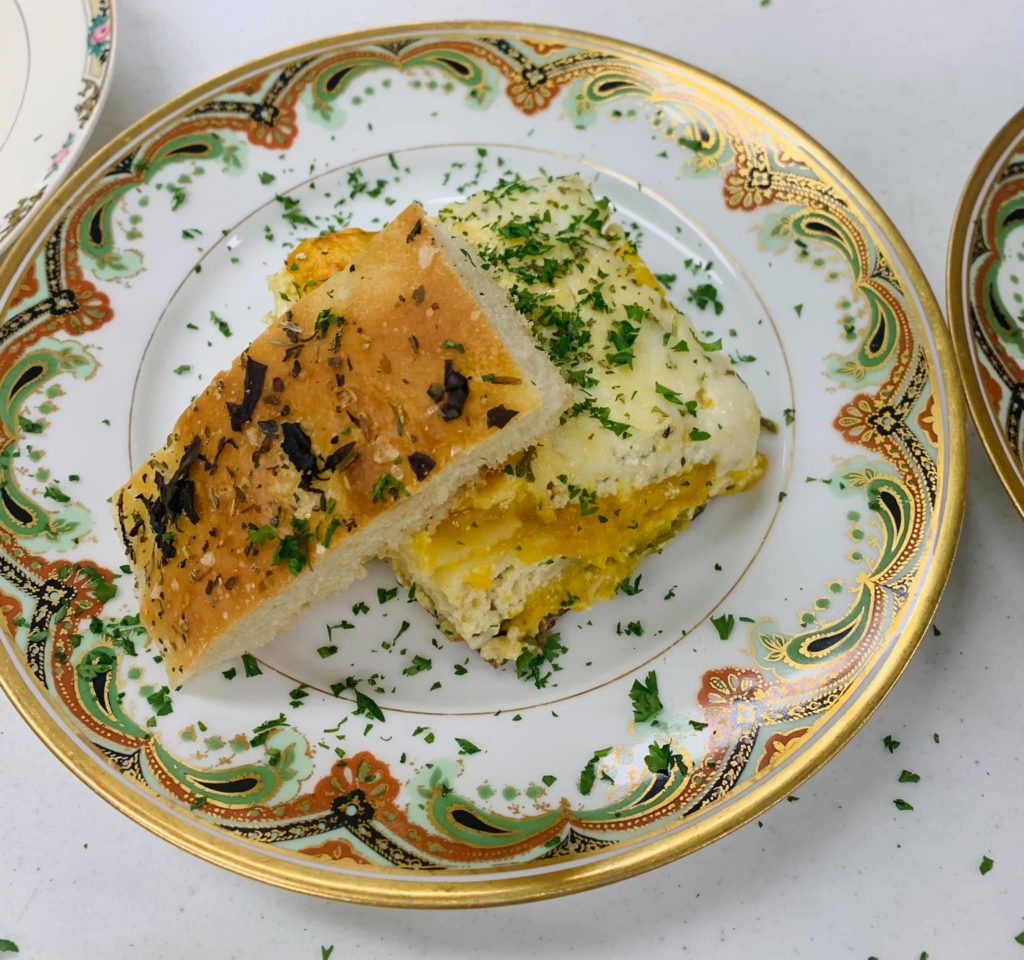 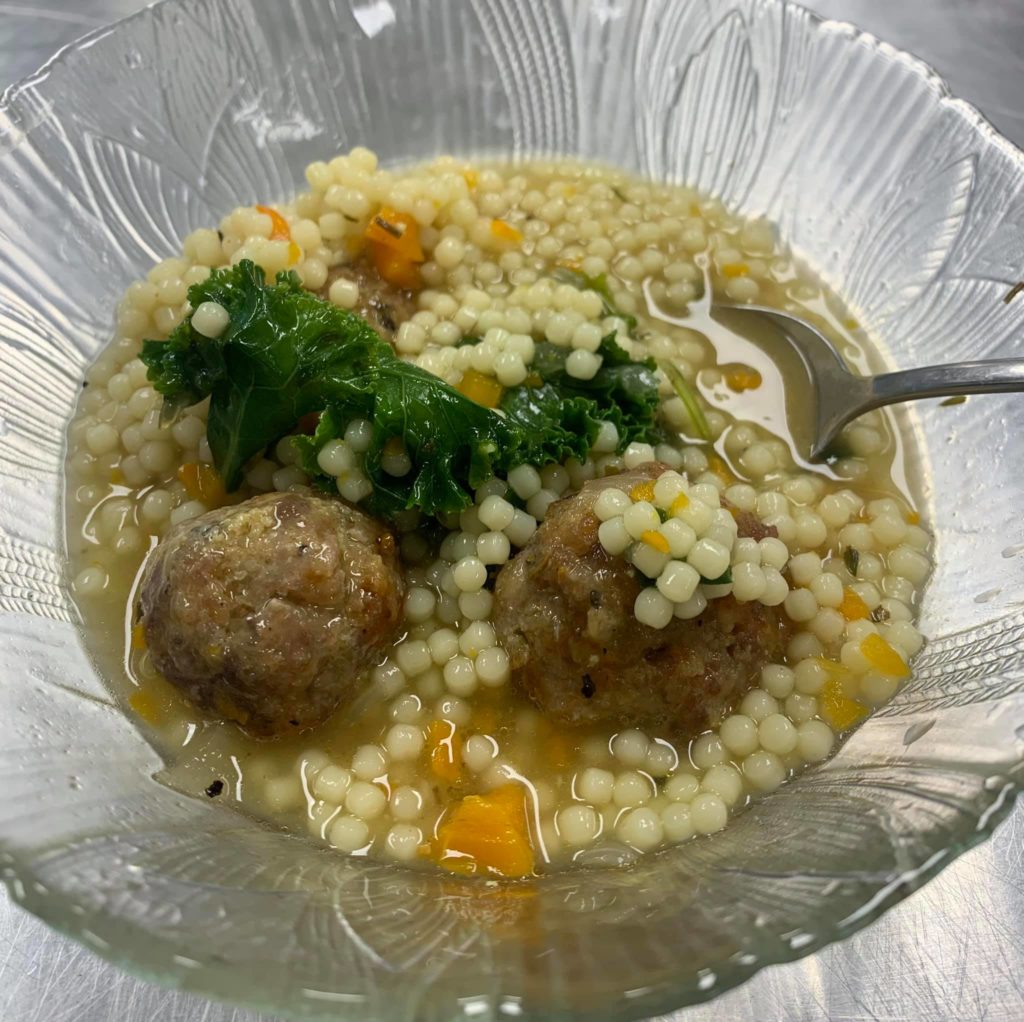 You have to work harder and you have to work smarter. It’s an unfortunate culture that I had to endure. But I’m very proud of where I’ve been able to go and now, I’m the only chef here. I don’t have anyone to disrespect me. My kitchen is my own little baby.”

When Reed first started the dinners at Prophetstown, she worked out of a much smaller residential galley kitchen that still exists adjacent to the compact commercial kitchen nestled in the basement of the farmhouse. Former Tippecanoe County Commissioner Nola Gentry was a big supporter of the farm and its mission and donated the funding to install the sleek stainless steel commercial kitchen that serves as home base for Reed and her small team of helpers who put on the dinners. After everything is served, Reed takes time to visit with every table to express her appreciation for the diners.

“I love the mission of the farm; I love what I do,” Reed says. “I want our guests to enjoy a unique experience, to talk with the other diners and maybe make a new friend. I hope they get to experience ingredients they haven’t tried before or perhaps haven’t had prepared in that way. That they experience this place and want to support what we do here.”  ★

The Farm at Prophetstown is a historic living farm museum set on 125 acres in Prophetstown State Park complete with a 1920s Sears, Roebuck & Co. replica farmhouse, outbuildings, orchard, livestock pens, pasture and croplands. For more information about events at the farm, visit prophetstown.org.

Reservations for the first wave of farm-to-table dinners this year opened January 10. A second block of dinners, scheduled from August 13 to November 4 will be available for booking on April 11. Call the farm at 765-567-4700 to claim your spot.

Know Before You Go

• No more than six spots per reservation. Larger parties are encouraged to schedule a private dinner.

• Payment is due at the time of reservation. Refunds offered with cancellations made at least 48 hours in advance.

• No menu substitutions. Vegetarian options may be available upon pre-arranged request.

• Out of respect to fellow diners, please arrive on time.

• As a small kitchen using farm-to-table ingredients, cross-contamination of allergens cannot be prevented.

Prophetstown State Park requires guests to pay $8 per vehicle for park admission, which is free with a farm membership or annual state park pass.